In this page, we are promoting Wing Chun Articles from other sources (Web Sites, Newspapers, etc.) that we think are interesting and important for the Wing Chun Community to read, perhaps analyze, and might be useful on your practice. Happy reading...

Disclaimer: For the original owner of any of these articles, if you mind that we're pasting your articles in our website, please drop us an email and we shall take out your article(s) after verifying your ownership of the respected article(s).

Siu Nim Tau is the basic form of Wing Chun. It comprises three specialties: (1) No need to exert force; (2) It possesses the strongest structure with the minimum use of energy; (3) It induces the release of mind force from a person.
Learning Siu Nim Tau is divided in to three stages.
Firstly, one must relax the muscles of the whole body. Then, he should infuse the spirit into the spine so that it is maintained straight. Contracting the anus is also important because it can help different parts of the body to form a unified structure.
The second stage is to practise in a completely relaxed state. When one is fully acquainted with all the moves, he should practise every move with the mind to initiate the movement without paying attention to whether the move is correct or not. He must ensure that every movement is initiated by the mind and not by the muscle.
After completing the training of the above two stages, it now comes to practise the main point of Siu Nim Tau. This is to learn how to release the mind force and the familiarization of the automatic reaction applying to fighting.
Read more »
Posted by Instructors at 6:06 AM 0 comments

During the week of September 20,1990 we had the honor of meeting Master Wong Shun Leung and Master Tsui Sheung Tin from Hong Kong. Master Tsui Sheung Tin was the third official student of the late Grandmaster Yip Man in Hong Kong and Master Wong Shun Leung was probably THE most famous fighter of the Wing Chun clan in the early 1950's. Bruce Lee was a student of Yip Man but it was mostly Wong Shun Leung who taught Bruce Lee his Wing Chun.Yvette Wong invited the two masters to visit the city of Victoria, B.C. for a holiday and at the same time arranged for them to give a two hour seminar. During their stay, she had frequent opportunity to clarify various points about Wing Chun. We hope some of these points will help the current generation of practitioners with their Wing Chun. After reading these points again, I am amazed at how many things these masters said in a very short seminar. They were literally overflowing with knowledge. These points were translated by Yvette Wong from the Cantonese talk that Master Wong Shun Leung gave. This means we may not have captured the true essence of all that was said. Siu Lin Tao The first set is like your alphabet. It allows you to construct words and sentences. Without it you cannot construct anything. It is the basic foundation of the Wing Chun art. Many of the concepts of the later sets already have their roots in the first set. For example the Jip sau (trapping hand) of the second set, is a combination of the first set Jut sau (jerking hand), and the first set Tok sau (uplifting palm; the movement performed after the Bong sau).The stance is done pigeon-toed in order to have a stable solid structure. It is like a camera tripod or pyramid. Triangle structures are the most stable of all structures. A wider different stance is not as flexible. Also when you get tired a different stance will cause you to collapse to the ground. The Wing Chun stance will still hold you up because of its triangular characteristic.Crossing the hands down and up in the first set defines your vertical center line. If you draw a straight horizontal line and use a compass to mark a cross above and below the straight line, then by joining the two points, you get a vertical centerline. This line is the center of the horizontal line. All actions in Wing Chun are done through this centerline.

Read more »
Posted by Instructors at 5:13 AM 0 comments 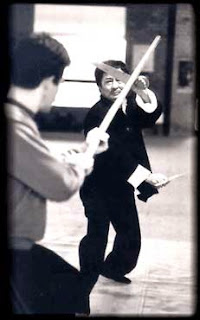 Master Wong Shun Leung, can you comment on some of the fights you won?
When we won in a fight, we weren’t always happy just to win. We tried to figure out how to win in a better and more economical way. The best is always if only a single action is required. Try not to use two actions. Like when kicking, Wing Chun doesn’t like to lift the knee first and then kick because this is a two step action. Also the line of force is wrong because your kick will not have ground support. Instead, your kick will transmit back to your body to off-balance you. This is why Yip Man’s kick in the second set looks a bit funny at first. We want to travel in a straight line from the ground to the target, not lift the knee first.
Can you comment on boxing?
In boxing, the style has changed over the years from crouching to being more and more vertical. Also people used to jump around, but the modern boxer like Tyson just moves in flat footed to demolish his opponent in a scientific way. In Wing Chun a person does not bob as in boxing. When two beginners fight it doesn’t matter how they fight, but against professionals it makes a difference. Even a smaller [person] is better off to keep the body vertical and step back, then to bob and weave. This is because the hand can move faster than the body. Boxing is still like a game because there are rules for how you can hit and how you can’t hit. If you attack someone and they bend their head, then in Wing Chun you can still hit them with your hand even without pulling your hand back.
What is the idea of the Chain punches in Wing Chun?
In Wing Chun if you throw two fast punches to someone’s head they’ll be knocked out. The first punch causes the brain to go to one side of the skull. If a quick second hit comes, the person is knocked out. If you withdraw the hand to give the second punch, then the brain can recover (will have more time to recover), but if you don’t give this time then a knockout results.
How can you deal with a good kicker?
Against a strong kicker there are two ways to fight. If you are experienced, just go into their center and hit. But if you aren’t, then back up. Each time the opponent misses, he will lose one degree of confidence. After a while you have more chances.
Read more »
Posted by Instructors at 11:42 PM 0 comments

An Interview With Ho Kam Ming

During his first visit to the United States (May 1989) Wing Chun master Ho Kam Ming provided invaluable insights which clarified numerous aspects of Wing Chun Kung Fu. During a two day seminar in Tucson, Arizona, master Ho warmly received questions for about eight hours. With more than sixty visitors in attendance, this was a remarkable feat.
Joining Ho Kam Ming was classmate and close friend Hawkins Cheung. The seminar was hosted by sifu Augustine Fong and assisted by Mr. Pak Chan. During this event, Mr. Chan translated the questions and Augustine Fong related Master Ho’s answers to literally hundreds of questions. In the transcription presented various exchanges are paraphrased and edited where necessary. A sincere attempt has been made to maintain the integrity of the discussion.
Master Ho was a past vice president of Yip Man’s Hong Kong Ving Tsun Athletic Association. On his first visit to the U.S. he lectured on many subjects including Wing Chun forms and fighting theory. Ho Kam Ming is from Macao and the Hong Kong area and studied Wing Chun with the late Yip Man for nearly twenty years. As a leader of the Wing Chun clan, it is not surprising that master Ho’s knowledge and experience excels that of the ordinary instructor. Hawkins Cheung was quick to appreciate Ho Kam Ming’s excellence in Wing Chun and remarked, “He received all the best information.”
Master Ho is in his late sixties and has spent almost forty years in studying and researching the principles of Wing Chun Kung Fu. His motivation for sharing this wisdom is summarized by him thus: “The future of Wing Chun is based upon you!” At this prestigious gathering, Ho Kam Ming demonstrated numerous fighting techniques and concepts. As inquiries were quickly answered and explained, it became apparent that he possessed a profound understanding of Wing Chun Kuen.
Augustine Fong, Master Ho’s leading student in the west, began the seminar with an intriguing and provocative statement: “This style was developed by Ng Mui; Ng Mui was a Shaolin monk!” This remark delivered a shock because Ng Mui, the legendary founder, is remembered as a Shaolin Budhist nun. (This was undoubtedly an early reference to information Yip Chun would later release concerning Cheung Ng and his new origins for Wing Chun Kuen.)
The traditional genealogy of Hong Kong Wing Chun Kuen followed: Yim Wing Chun, Leung Bok Chau, Wong Wah Bo & Leung Yee Tai, Leung Jan, Chan Wah Shun & Leung Bik and Yip Man, the Hong Kong school, etc. Wing Chun’s basic stance (Yee Jee Kim Yeung Ma) was then demonstrated and explained: “The knees and toes are held inward, the spine erect, and hips pushed forward.” It is here that master Ho Kam Ming begins to accept questions: